Stephen A. Smith Rants about ‘Elements of Provocation’ in Domestic Violence Matters… 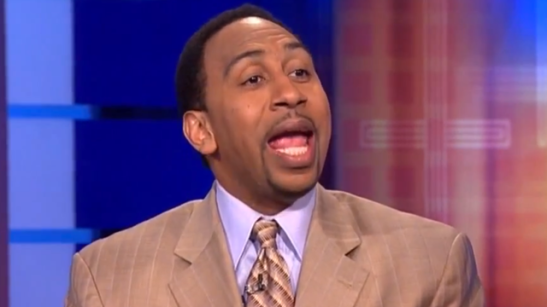 Stephen Smith is at it again… Even though he often says things that grate my nerves, I agree with some of what he says.  However, not this time. Domestic violence is a touchy issue. And it IS NEVER ok.  No one should be able to provoke another to the point of anger that includes harm to another individual. For many emotions & issues  run deep & at times things can get out of hand, but self-control must be practiced & practiced again. It is never okay to hit anyone…. Now with that said, what do you think of Stephen’s rant?

The YBF says: If you’ve never seen ESPN’s “First Take” or heard of Stephen A. Smith, one (not everyone, but some people) MIGHT describe him as the Kanye West of sports journalism. He has ALL THE ANSWERS, he’s always right and he’s LOUD.  Most of the time, he does make great points and he definitely knows his stuff.  But…..he has his moments.

A little backstory:  Baltimore Ravens running back Ray Rice has been suspended for two games for allegedly knocking out his wife Janay Palmer a few months ago during a trip to Las Vegas before being seen, on surveillance tape, dragging her limp body off an elevator.

Fast forward to today….Stephen A. Smith suggested Ray deserved a harsher penalty however, he stepped in the doo doo when he tried to take women (often on the receiving end of the abuse) to task for their behavior.

Watch and or read it below.

“We know you have no business putting your hands on a woman. I don’t know how many times I got to reiterate that. But as a man who was raised by women, see I know what I’m going to do if somebody touches a female member of my family. I know what I’m going to do, I know what my boys are going to do. I know what, I’m going to have to remind myself that I work for the Worldwide Leader, I’m going to have to get law enforcement officials involved because of what I’m going to be tempted to do. But what I’ve tried to employ the female members of my family, some of who you all met and talked to and what have you, is that again, and this what, I’ve done this all my life, let’s make sure we don’t do anything to provoke wrong actions, because if I come, or somebody else come, whether it’s law enforcement officials, your brother or the fellas that you know, if we come after somebody has put their hands on you, it doesn’t negate the fact that they already put their hands on you. So let’s try to make sure that we can do our part in making sure that that doesn’t happen.”

“Now you got some dudes that are just horrible and they’re going to do it anyway, and there’s never an excuse to put your hands on a woman. But domestic violence or whatever the case may be, with men putting their hands on women, is obviously a very real, real issue in our society. And I think that just talking about what guys shouldn’t do, we got to also make sure that you can do your part to do whatever you can do to make, to try to make sure it doesn’t happen. We know they’re wrong. We know they’re criminals. We know they probably deserve to be in jail. In Ray Rice’s case, he probably deserves more than a 2-game suspension which we both acknowledged. But at the same time, we also have to make sure that we learn as much as we can about elements of provocation. Not that there’s real provocation, but the elements of provocation, you got to make sure that you address them, because we’ve got to do is do what we can to try to prevent the situation from happening in any way. And I don’t think that’s broached enough, is all I’m saying. No point of blame.”

One comment on “Stephen A. Smith Rants about ‘Elements of Provocation’ in Domestic Violence Matters…”

This entry was posted on July 25, 2014 by Toiah in Everything you want, Injustice and the Unacceptable!, The Juicy Stuff, Yeah I said it! So what! and tagged Stephen Smith.